I love catching sight of the Cushman railroad bridge when we head to Florence on Highway 126. Almost a century old, I think it is one of several iconic sights on that route to the coast. The steel bridge crosses the lower Siuslaw estuary about three miles east of the Pacific Ocean, and as a “swing bridge,” it is able to rotate at the center to allow boat traffic through. In all, it is 0.7 miles in length and is topped with a wooden keepers quarter. 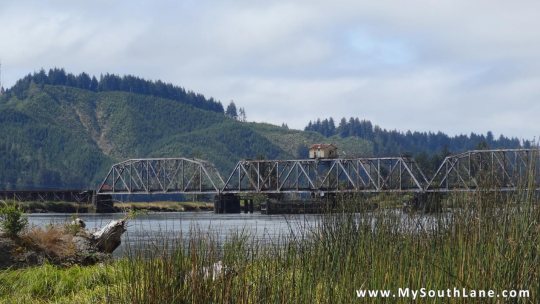 Also known as the Southern Pacific Bridge, it was built in 1914 and was a major link in the 134 mile railroad connection between Eugene and Coos Bay. This rail line was vital for taking products from the Willamette Valley to Coos Bay for export, and bringing products that came into Coos Bay in to markets in the interior. While the line was closed for several years, it is now open again as the “Coos Bay Rail Line,” which celebrated its two year anniversary in October 2013.

I always love seeing this bridge as we head to Florence, and some day I would love to take a boat ride underneath it. If the rail line ever closes for good, I hope it will be converted to a rails-to-trails (like the Row River Trail here in Cottage Grove), so the historic bridges along its route will be saved. Wouldn’t it be fun to ride a bike across this bridge and all the way into Reedsport?!

One thought on “Cushman Railroad Bridge”