Battle between the Lady Washington and Hawaiian Chieftain on Coos Bay.

The sound of cannon fire ricocheted off the building behind us while the smell of gun powder drifted across the bay. The two ships, each at full mast, maneuvered through the water, one taking a tight turn and firing again. Once the boom subsided, I could hear the crew shouting orders and the mateys yelling taunts. This was my introduction to the Lady Washington and Hawaiian Chieftain.

Each summer, the two tall ships sail up the Oregon coast as they travel from California to their home port in Grays Harbor, Washington. The ships are owned by the Grays Harbor Historical Seaport Authority which has the goal of preserving and promoting our maritime history and traditions, especially the lives of 18th century sailors. Primarily this is accomplished through educational programs for 4th, 5th, and 6th grade students at each of the ports they visit. Luckily, they didn’t forget those of us who are slightly older than that.

Crew of the Hawaiian Chieftain.

The original Lady Washington voyaged to the Pacific Northwest in 1787 and from there to Japan, Honolulu, and Hong Kong. Today’s Lady Washington, launched in 1989 by the Seaport Authority, is a full-scale replica of that original ship. The Hawaiian Chieftain, built in 1988, is designed after early colonial passenger and coastal packets which worked along the developing seaboard towns in the 18th and 19th centuries. It is this attention to authenticity which makes excursions on these two ships enjoyable. 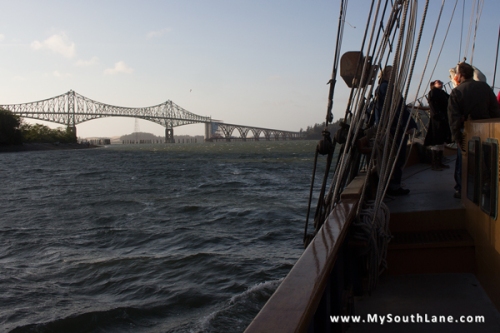 Approaching the Coos Bay Bridge aboard the Hawaiian Chieftain.

“Our most popular program is the battle sail when both ships go out on a 3-hour excursion,” Joe Follansbee, communications director for the Seaport Authority, told me earlier this year. They use small cannons, with real gun powder, and real booms but no cannon balls. The ships engage in battle with maneuvers that are as authentic as possible.

If you like your adventure a little quieter, the evening sail — which we did — might be more your speed. Or, if you are really interested in the lives of 18th century sailors, you can volunteer to live and work aboard the ships.

In 2016 the two ships will be in Oregon during the month of May, docked in Coos Bay May 7-16 and Newport  May 19-31. Visit the Historical Seaports Website for more information.