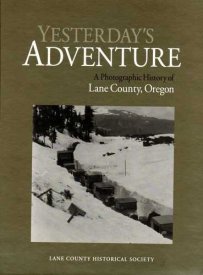 I admit, I am addicted to books. While computers and the internet are definitely good friends, my true love is a good book. So, it is no surprise that the other day, when I realized I was going to have some free time on my hands, I stopped by the library for a book. In just a few minutes, I emerged cradling a short stack. One of those books was “Yesterday’s Adventure: A Photographic History of Lane County, Oregon” published in 1998 by the Lane County Historical Society.

When I grabbed Yesterday’s Adventure, I thought I would probably just browse through the photos to see if I could find any new pictures of south Lane County. However, when I got home and opened the cover, I discovered a book that was as delightful to read as it was to look at.

Each chapter begins with just enough information to give historical context to the photographs, including an overview of what was happening at the time, as well as brief quotes from historical interviews and writings. Additionally, each of the photos is identified and also described. Instead of just looking for photographs of Cottage Grove, I enjoyed reading about the history of all of Lane County.

While it may seem adventurous to us today, Yesterday’s Adventure is really about the everyday lives of the everyday settlers and people who made Lane County home. The chapter “Making a Home” is a perfect example. At the beginning of the chapter, the author’s share this story by Betty Wilkinson who was interviewed in the 1930’s:

“The way I got my washing machine was when I was carrying my second boy. He weighed twelve and a half pounds. It took me two days and nights to deliver. Wayne [her husband] did the washing twice, him and his mother. She made him wash on the board, and she’d throw’em back if they wasn’t clean. The third washing, we got a washing machine.”

It is engaging stories such as this, along with well-chosen historical facts, which give perspective to the photos and make this such an enjoyable book.

Yesterday’s Adventure is available at local libraries, and the Lane County Historical Society and Museum lists paperback copies for sale.