By today’s standards, John Day Oregon would be considered a small town and in the 1880s it was even smaller, with a population under 300 people. However just outside the city limits along the banks of Canyon Creek stood a bustling community of at least 1,000 Chinese immigrants, the largest Chinese community in eastern Oregon. The people living in this community were almost entirely male and were lured to the region for the same reasons that many of the white settlers were — Gold!

The rush began in 1862 when gold was discovered in nearby Canyon City. It brought an influx of settlers to the area, including Chinese miners and laborers. By 1910 the Chinese population was moving out of John Day, but two men remained, Ing “Doc” Hay and Lung On.

Lung On and Ing Hay with two friends in the early 1900’s. Photo from the National Park Service.

Doc Hay and Lung On did not come to John Day to mine gold, but to do business with the miners. In 1888 they opened a store in the Kam Wah Chung & Co. building. For over 50 years Doc Hay practiced pulsology and herbal medicine, while Lung On, who arrived fluent in both English and Chinese, was a skilled merchant. The story of their lives and other Chinese immigrants in eastern Oregon is told at the Kam Wah Chung State Heritage Site in John Day, Oregon. 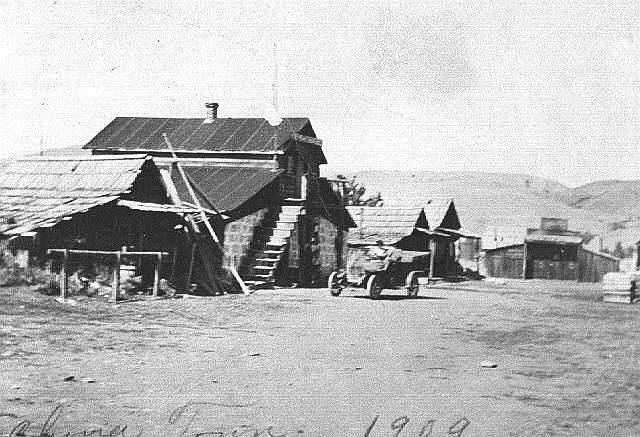 We visited the Kam Wah Chung State Heritage Site on a sunny summer afternoon. Today the building sits in a well-used city park, surrounded by lush green grass. Imagine instead, if you can, a bustling Chinese community with three stores, a temple, a laundry, temporary housing for the men, vegetable gardens, and even a stocked fish and duck pond.

A tour of the building actually starts in a separate Interpretive Center. Photos, video, and historical artifacts have been brought together to provide a backdrop for Doc Hay and Lung On’s immigration to the United States, the famine and political unrest they were escaping, and the hostilities Chinese workers faced here in Oregon. A ranger-led tour of the Kam Wah Chung building occurs hourly.

The Kam Wah Chung & Co building not only served as a medical practice and general store, it was also a post office, an informal library, their store room, a safe gathering spot, a place to rent a bed for the night, and Ing Hay and Lung On’s home.

Once the gold rush ended and most of the Chinese workers had moved on, both Lung On and Ing Hay remained. Doc Hay was a respected doctor and people – both white and Chinese – would travel great distances to see him. Lung On was a successful business man, including owning  the first automobile dealership and service stations in eastern Oregon, as well as other successful business ventures.

Groceries on the shelves at the Kam Wah Chung State Heritage Site.

Lung On passed away in 1940 and Ing Hay lived in this building until 1948. After breaking his hip, he was taken to Portland to recover and the building was boarded up in anticipation of his return. He never did return, but died in Portland in 1952, at 89 years of age.

Neatly preserved inside the building, thanks to the eastern Oregon’s dry weather, is the story of Ing Hay and Lung On’s lives, as well as the lives of other Chinese immigrants during the late 19th century. Goods still line the shelves in the store, boxes of herbs are still stacked in Doc Hay’s work area, an orange still sits on the alter, Doc Hay’s slippers wait for him beside his bed, and his wok still sits atop the stove. Chinese posters and calendars adorn the walls which are black from tobacco smoke, and steel panels remain on the doors and windows installed to protect the occupants from gun fire.

Some of the many herbs that kept the John Day community healthy for over 50 years.

Listen to the floor boards creak as you walk through the building, take deep breaths to smell the juniper and herbs, and imagine the people whose lives were impacted by this building and the two men who lived here.

After visiting the Kam Wah Chung State Heritage Site, I have become more attuned to the stories of Chinese immigrants in Oregon’s early history, especially eastern Oregon. Their stories are out there, if you look and listen.

Both Lung On and Ing Hay are buried at the near-by Seventh Day Adventist Cemetery. We also found many artifacts from other Chinese residents in the area at the Dewitt Museum Depot Park in Prairie City, 13 miles to the east.