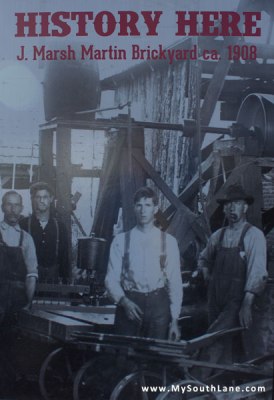 As traffic streams by along West 11th in Eugene, four brick workers from the J. Marsh Martin brickyard silently observe the bustle from their poster adhered to a metal utility box. Three feet wide by four-and-a-half feet tall, the poster is basically a large photograph with a brief description of the people and places within it. Taken in 1908, the photograph shows the men going about their daily lives making bricks for building local homes, yet at the same time, establishing the history for this neighborhood which today continues to house many home improvement businesses.

Across town, three of the Cummins family children, Fern, Clement, and Hattie, watch traffic flow by from their poster hung along Goodpasture Island Road. In their photo they stand in front of the ferry on Goodpasture Island with a car waiting in the background. The year is 1916 and the ferry connects their farm on the island with the River Road area. One hundred years later, Goodpasture is no longer an island and is home to many car dealerships and apartment buildings.

These two waterproof, vinyl posters as well as nine others scattered around Eugene are part of the History Here project. They tell the stories of the everyday people who once lived and worked in these locations. Sara Palmer, former executive director of the Shelton McMurphey Johnson House, conceived the idea and shared it with Heather Kliever, registrar with the Lane County Historical Society and Museum. Excited about the idea of educating people — especially children — about history without them needing to come to a museum, the two women applied for a grant from the Lane Arts Council.

The Arts Council liked the idea too, and provided funds to place the posters around the city of Eugene. The posters “bring historical awareness to the community,” says Liora Sponko, executive director for the Council. She notes that the panelists who awarded the grant felt the unique project had the potential to reach thousands of people each day.

History Here poster on the corner of 7th and Blair in Eugene.

My introduction to the History Here posters happened one afternoon as I sat in my car waiting at a red light on West 7th and Blair. I watched as two women crossed the street and then paused on the corner. They turned to look at the utility box and then walked off together talking. As the light turned green, I drove slowly past and saw the History Here poster that drew their attention. Further investigation revealed Phoebe and Amelia Skinner, the daughters of Eugene and Mary Skinner. From their location outside a fish market, they surveyed the Whiteaker neighborhood, land which Phoebe once owned.

Later, I experienced Kliever’s love for history firsthand as she took me on an impromptu tour through the back rooms of the museum, up creaky stairwells and behind locked doors where I examined old quilts, peeked at the dismantled parts of a covered wagon and saw a dizzying array of historical artifacts packed into every nook and cranny. It is this love for history which she and Palmer hoped to share with others outside of the museum walls.

Kleiver and Palmer put together a collection that represents the diverse people who once lived and worked in Eugene – young and old, male and female, rich and poor, and engaged in work as well as leisure activities. Designed to convey parts of history that are mostly unknown, the posters provide a direct link between the past and the present. They “let people place themselves within history,” Kliever says.

For people driving past on Eugene’s streets, the History Here posters probably seem little more than a blur, if they are noticed at all. The posters have been placed to be noticed by pedestrians as they walk down a sidewalk or congregate at a corner waiting for a light. It is here that the poster will capture people’s attention and provide a quick glimpse into the lives of people just like them – everyday Eugenians – who happened to live at the turn of the previous century. 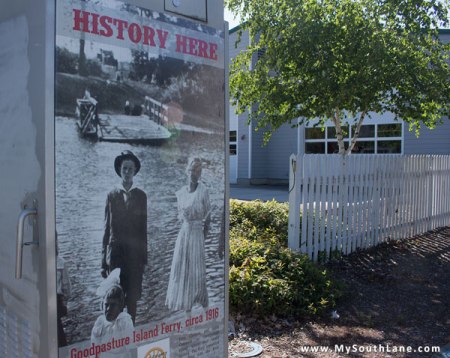 The posters have also been noticed by others outside of the city. They received the Oregon Heritage Excellence Award from the State of Oregon Parks and Recreation, an award which goes to projects which make outstanding contributions to preserving Oregon heritage. The appeal of the project, says Kyle Jansson of the Heritage Commission, is that it makes “heritage and history available in places where you don’t usually come across it.”

Kliever says she and Palmer enjoyed being able to share their love for history with people within the community. When Palmer left the area, Kliever worked with the new executive director of the Shelton McMurphey Johnson house, Leah Murrey, to finish the project.

See the Shelton McMurphey Johnson House website for a map.

While the grant funding this project required the posters be placed in Eugene, Kleiver says she would like to see it grow into the broader county, sharing the rich history of our region. Both Murrey and Bob Hart, executive director of the Lane County Historical Society and Museum agree. “This worked nicely here in Eugene,” Hart says, noting that the posters are very adaptable. Jansson with the Heritage Commission noticed this as well. At the heritage conference where the awards were presented, people began discussing the possibility of doing the project in other locations.

Hart says the museum would be glad to assist other Lane County communities in finding the historical photographs and designing the posters. Anyone interested in exploring a similar project should contact him at the Lane County Historical Society and Museum.

Note: This article was originally written for a journalism class in spring 2015 and has been updated and modified to fit on the blog. Thank you to everyone who took the time to talk with me about this great project.

3 thoughts on “Connecting the Present to the Past: History Here, Eugene”